You are here: Home / About Us

Afro-Eire began its journey back in 2008 with a mission to foster traditional African drumming and dance in Ireland.

Since then we have facilitated thousands of children through our African Drumming for Schools programmes, facilitated Team Building workshops for some of the largest companies in the world, provided African bands for weddings and festivals, and organised some of the most exciting African drumming workshops with some of the worlds’ best teachers.

But we aren’t finished there, we are always ready to adapt to new challenges and events. 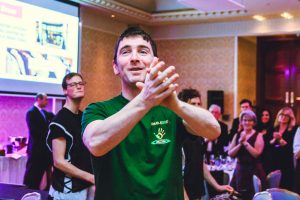 A multi-instrumentalist with extensive knowledge of West African music, Paul has studied music extensively in Africa, Europe and South America.  He holds an MSc African Politics from the Schools of Oriental and African Studies (SOAS), University of London and BA International Relations DCU.

Paul began his African music studies in The Gambia in 2002 with Master Drummer Tomas Camara from Les Ballet Djoliba of Guinea.  He returned to The Gambia in 2004 to study with Senegalese drummer Boubacar N’Diata.

In 2006 he travelled to Burkina Faso and Mali to study Kamele n’goni (African harp), and again in 2008 with Kamele n’goni and balafon master Idrissa Diarra.  Finally, in 2012 whilst working for a child rights charity in Dakar, Senegal he studied with Malian Master Drummer Drissa Kone.  In between trips to Africa Paul has had the chance to study and perform with a host of great musicians including Mamady Keita, Babara Bangoura, Sidiki Dembele and Seckou Keita.